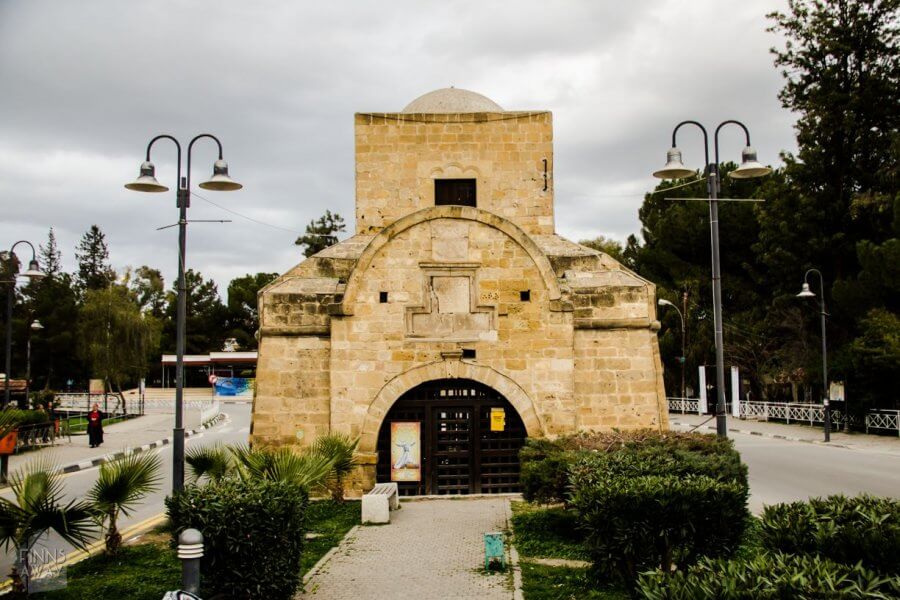 Northern Cyprus consists of 5 districts. These districts are divided into Nicosia, Famagusta, Kyrenia, Trikomo and Morphou.

Nicosia is the capital of Northern Cyprus. Because of being the capital, it is the most populous city of Cyprus. The most important feature is the only divided capital in the world. There are many historical places to visit in Nicosia. These include places such as Büyük Han, Selimiye Mosque and Venetian Column.

Büyük Han was built in 1572 by the first Ottoman Governor Muzaffer Pasha. In the past, it has been used as a shelter for prison and the poor. Today, it is the center of attention of tourists and locals with its shops selling products such as handicrafts, antiques, and a restaurant with dishes special to Cyprus.

The construction of the Selimiye Mosque was started in 1208 by the Latin Archbishop Eustorge de Montaigu. In the past years, coronation ceremonies of the Lusignan kings were held in Selimiye Mosque. When the Ottoman State conquered Cyprus in 1571, it was transformed into the largest mosque in Northern Cyprus. In 1954, the name of the 2nd Sultan Selim was given and it has survived to the present day as the Selimiye Mosque.

The Venetian Column was erected by the Venetians in 1550. It is believed that the column with the emblem of 6 Italian families at the bottom of the Venice Column, which is 6m long, came from a temple in Salamis.

With its many historical monuments and tourist attractions, Nicosia is the center of attention of tourists.

Famagusta attracts attention with its harbors and it being very calm. It is home to many historical sites and constantly faces intense interest from tourists. In addition, its unique beaches are another focus of interest. Amongst the places to visit there are places such as Lala Mustafa Pasha Mosque, Namık Kemal Dungeon and Salamis Ancient City, which still contains the monuments of the past.

Lala Mustafa Pasha Mosque was built between 1298 and 1312 by the Lusignans. Although it was first opened as a cathedral in 1328, it was converted into a mosque by the Ottoman Empire in 1571. Today, it is still used as a mosque and it remains one of the places where the locals and tourists are most interested with its unique architecture.

Namık Kemal Dungeon is one of the interesting places of the castle. When Namık Kemal was exiled to Cyprus in 1873, he remained in this dungeon for 38 months. Today, documents related to Namık Kemal are included in the dungeon.

Salamis Antique City contains the finds dating back to the 11th century BC. The city of Salamis was partially exposed with the excavations between 1952-1974. It is known that the building remains belong to the Roman period. Salamis Gymnasium, Salamis Theater, Ayia Epiphanios Bazilikas, Salamis Necropolis, Cellarga Mass Graves, Nikokreon Monument are located in Salamis Ancient City. Today, it attracts attention among the places that attract intense attention. Open-air concerts that are performed periodically revive the Ancient City of Salamis. 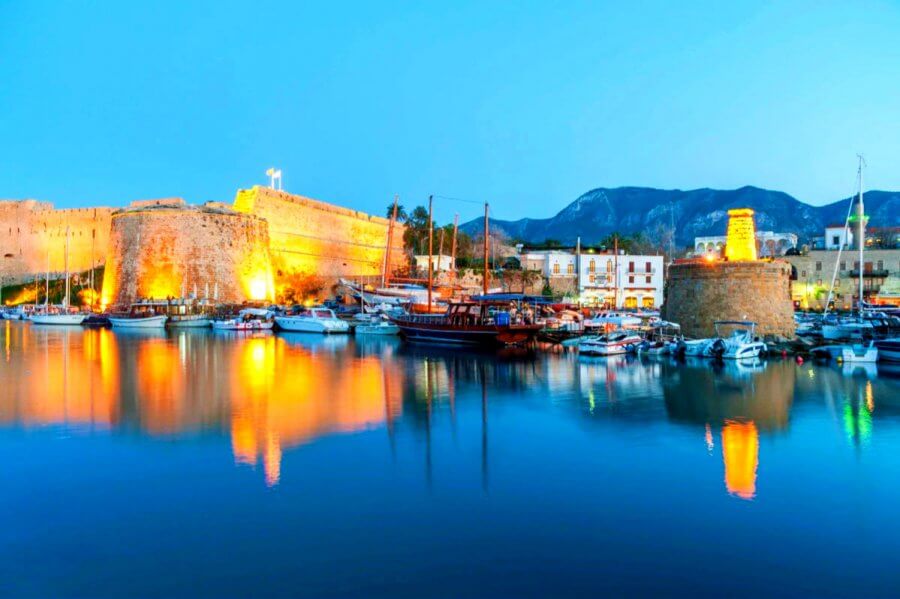 Kyrenia is the most sought after region of Northern Cyprus with its harbor and chirpy life. It offers a visual feast to its visitors with its unique sea and mountain views. Historical places to visit includes Kyrenia Castle, Kyrenia Marina, Sunken Ship Museum, Blue Pavilion and Bellapais Monastery.

Kyrenia Castle is a castle built by the Byzantines in the 7th century to protect the city against Arab-Islamic attacks. The castle, which has been home to many civilizations from time to time with its unique architecture, is one of the most remarkable places in Kyrenia. The Sunken Ship Museum, which is also located in the Kyrenia Castle, also draws attention. It emerged as a result of the studies carried out in 1968-1969. In 1976, the ship was opened for exhibition. From the remnants of 4-person drink, spoon and salt shaker in the Sunken Ship, it was found out that 4 people lived on the ship. It is visited by many tourists and locals every year.

Kyrenia Yacht Harbor was completely opened to the use of yachts in 1987. It is possible to come across boats and fishermen as well as yachts. Yacht Harbor, which is very close to Kyrenia Castle, is a frequent destination for everyone. 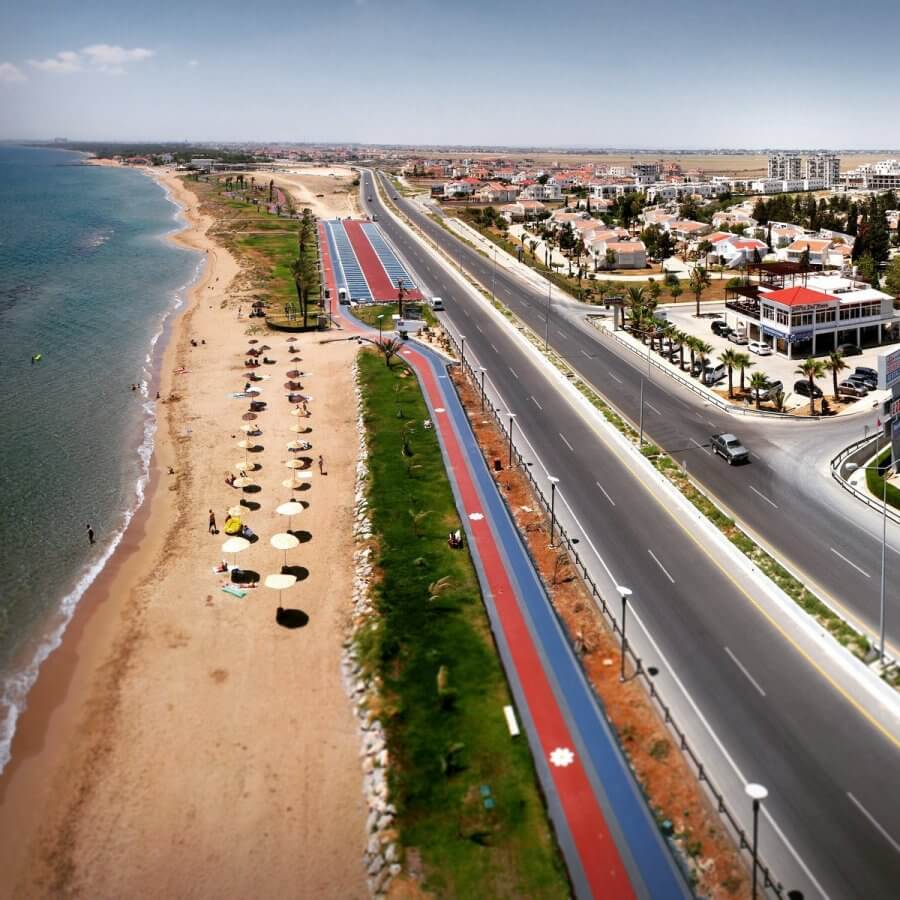 Bellapais Monastery is a historical monastery located in Beylerbeyi. Its construction began in the 12th century in the Roman era, and later in the middle ages, it has been added to the present day. The monastery, which was built between 1198 and 1205, displays a gothic breeze. From time to time, concerts and music festivals are also held in the monastery.

Trikomo is the most beautiful coastal town of Cyprus. Trikomo region, which is intertwined with nature and the sea, attracts great attention. The heart of the tourism industry beats in Trikomo. The ever-developing Trikomo region hosts more and more tourists every year. Places to visit in the Trikomo region include places such as Trikomo Coastal Road, Kantara Castle and Trikomo Icon Museum.

Trikomo Coastal Road is the most popular place of Trikomo. It is subject to intense interest almost every day and it is a place that tourists do not always leave empty in the locals as well. The coastal road, which attracts attention from people who walk and cycle during the day, is a frequent destination for people who love the sea because it is next to a beach. At night, you can find the snack you have at the stands, and families with children can leave their children to the park and take their evening walks.

Kantara Castle, built by the Byzantines in the 10th century, was built for the purpose of a watchtower with a height of about 600 m from the sea. It is one of the places that attract intense attention today. With its magnificent view, unique architecture and clean air, it meets the intense interest of tourists and locals. 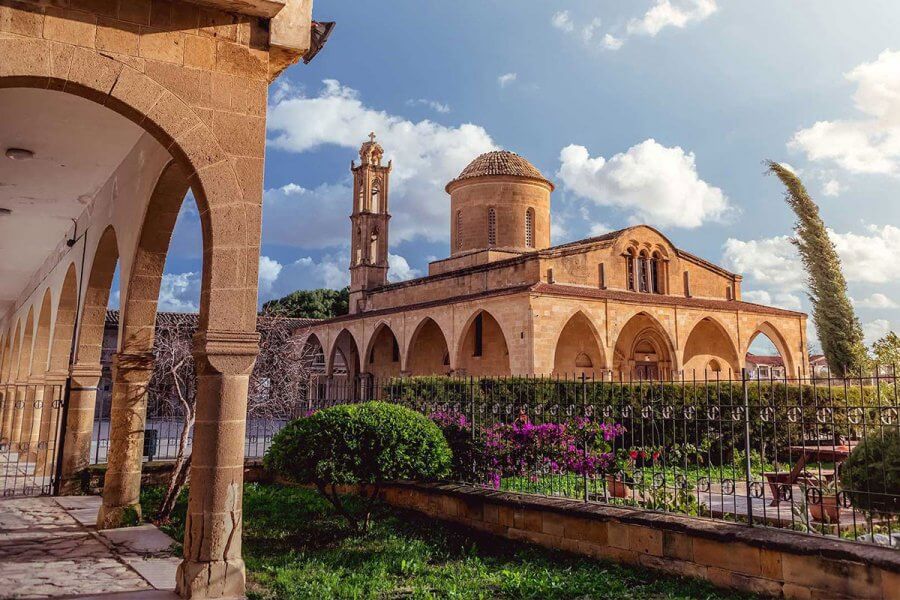 Morphou has hosted Aphrodite, the goddess of beauty, according to legends. Most of the citrus production is done in Morphou throughout the island. Morphou comes to mind when talking about orange. So much so that it hosts orange festivals every year. Places to visit in Morphou region include Vuni Palace, Tumba Tu Skuru and St. Mamas Church.

Vuni Palace was established in the 5th century to look after the Greeks. The palace, which lasted for about 70 years without any damage, was burned by the Soli people and was not renewed afterwards. Today, only the ruins of the palace can be seen.

Tumba Tu Skuru was built between 1550-1700 BC by Egeli merchants. Excavations were carried out between 1971-1974 and the works were unearthed. You can see all the works in the Morphou Archeology Museum.